This delicious and healthy Superfood Hot Chocolate is a warm pick-me-up for a cold winter morning or a chilled drink in the late afternoon.
It can also be served vegan with almond milk.

Tip: If coconut milk is stored overnight in the refrigerator, it becomes thicker and can be easily whipped in a mixer or with a mixer. 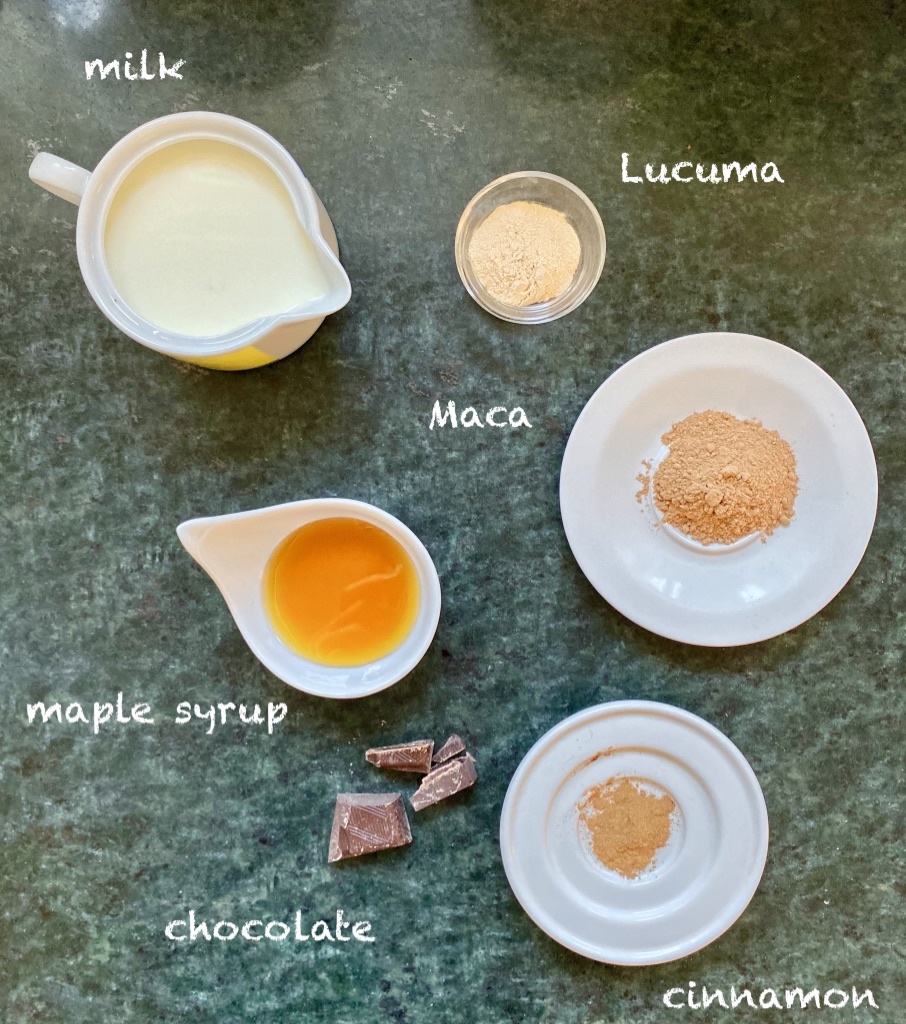 CACAO is the purest form of chocolate. This means that it is raw and therefore contains more nutrients. Cacao has many antioxidants as well as magnesium, calcium and iron.

The nutrients in Cacao are good for the cardiovascular system, they ensure a beautiful skin and have a stress-reducing effect.

Here you can find more information about Cacao.

CINNAMON is a spicy, bitter and slightly sweet spice and comes from the dried bark of cinnamon trees. It has a warming effect, no wonder that it should not be missing in Christmas baking.

Whether cinnamon has a positive effect on the blood sugar level has been the subject of various studies, but has not yet been proven with certainty (www.webmd.com).

In cinnamon the flavouring Cumarin is contained, which can cause however in large quantities consumed liver damage.

COCONUT MILK is made from the flesh of coconuts. This flesh consists of 1/3 saturated fatty acids. It is grated, mixed with hot water and then pressed to form a milky liquid. It is then filtered, heated to ultra-high temperatures and finally bottled.

Coconut milk already has a high fat content, but this is lower than cream or crème fraîche.

It contains the minerals calcium and potassium, magnesium and phosphorus as well as the B vitamins, vitamin C and E, iron, iodine, copper, manganese, selenium and zinc.

The fatty acids they contain are medium-chain, i.e. they are quickly digestible and can quickly return lost energy.

The cholesterol level is increased, but only the so-called 'good' HDL cholesterol.

One of the fatty acids, lauric acid, counteracts pathogens thanks to its antiviral and antibacterial properties.

If coconut milk is stored overnight in the refrigerator, it becomes thicker and can be easily whipped in a mixer or with a mixer.

CREAM is the fatty phase of milk and contains numerous vitamins like A and D, the B vitamins as well as C, E and K.

The minerals include calcium and chlorine, potassium and magnesium, sodium and sulphur.

Despite its fat content, cream is easily digestible thanks to its structure.

However, it consists of 2/3 saturated fatty acids and contains cholesterol. You should therefore not consume too much of it every day if you want to eat a balanced diet.

DARK CHOCOLATE lifts the mood, is good for the heart and increases concentration. Here, flavanols, which belong to the flavonoid family and are naturally occurring plant active ingredients, are said to have an antioxidant effect and be positive for heart health overall. This has been investigated in several studies.

Cocoa should also have a positive effect on the brain and support the ability to concentrate. Especially in old age, cocoa should protect against memory loss. This was the finding of a study conducted by Columbia University Medical Center during its research.

The cocoa mass in dark chocolate contains valuable nutrients such as calcium, iron, fluorine, copper and the vitamins A, some of the B group and E.

LUCUMA is a tasty and at the same time healthy alternative to sugar - and it is also low in calories, with a low glycaemic index. Good for diabetics, as the blood sugar level only rises slowly after the consumption of Lucuma.

The fruit is rich in protein, fibre, calcium and iron, potassium, magnesium, phosphorus and zinc, beta-carotene, vitamin B1, B2, B3 and vitamin C.

It acts as a good source of energy, revitalizes and inhibits inflammation and digestion.

MACA has numerous vitamins to offer such as B1, B2 and B6, C and E as well as minerals such as calcium and potassium, magnesium, sodium and sulphur. It also contains trace elements such as iodine, copper, manganese and silicon, zinc and tin.

The Maca tuber also contains monounsaturated and polyunsaturated fatty acids, which are very important for the health of the body.

Thanks to its vital substances, this tuber, which tastes earthy and vanilla at the same time, gives the body and mind more strength and endurance, helps with stress and is also a herbal mood enhancer.

As an adaptogen, the root tuber from the Andes has a balancing effect on the hormone system.

It therefore helps to alleviate menopausal symptoms such as insomnia, hot flushes and mood swings and to increase libido.

Researchers found out in a study, how Maca can increase the psychological well-being and relieves the up and down of the hormone system during the menopause.

However, unlike soy or yam, the Maca plant does not contain any phytoestrogens. Another study in 2006 showed that Maca can be a good alternative to hormone replacement therapy.

Phytosterols have a positive influence on cholesterol levels.

MAPLE SYRUP is a sugar-sweet vegan alternative to honey and is the thickened juice of North American and Canadian maple trees. The ingredients, including polyphenols, are said to have antioxidant and anti-inflammatory properties. The lighter the colour, the higher the quality of the ingredients. The quality classes are AA, A,B and C, whereby the class AA is considered the best quality: particularly bright, very mild tasting.

In addition, maple syrup has a lower glycaemic index than, for example, normal household sugar. This means that the blood sugar level does not rise as high.

Nevertheless, there is still enough sugar in the syrup in the form of sucrose, fructose and glucose.

Maple syrup contains minerals such as calcium and potassium, magnesium and the trace elements iron (but in small amounts), zinc and manganese. The vitamins thiamine and riboflavin are also included.

MILK is very rich in proteins and offers numerous vital substances such as vitamin A, the vitamins of the B group and D as well as the minerals calcium, magnesium and zinc.

Lactose helps to ensure that the minerals can be used optimally by the body.  They also serve as food for the intestinal bacteria.

Milk proteins are also said to contain substances that have an effect on nutrient uptake and metabolism.

However, milk is not intended as a thirst-quenching drink, but is too rich in protein and fat. It has above all saturated fatty acids, which are not exactly favorable for the blood fat level.

However, many people cannot tolerate lactose because they lack the enzyme lactase (lactose intolerance) which is necessary for digestion.