Already the Egyptians of antiquity called honey the source of immortality and the 'food of the gods' and is still used today in many ways. Whether as a delicious sweetener or as a remedy for a cold, for example, in a cup of warm milk - honey is a fascinating and in addition a natural product.

Where does honey come from?

Bees produce honey from the sugary juice of plant flowers, the nectar, for their own food supply. This is stored in the honeycomb where it slowly matures into honey. Honey is usually a thick, creamy and sometimes crystallized substance consisting mainly of the sugars fructose and glucose as well as water.

Beekeepers finally ensure with their care and maintenance of the bee colonies that the extracted honey becomes usable for human consumption.

There are different methods of getting the honey out of the combs.

Centrifugal honey, for example, is obtained by using centrifugal force and has been the most common type of honey since the beginning of the 20th century.

Disc honey, on the other hand, consists of unincubated pieces of honeycomb from purely natural construction. Honeycomb honey is similar to this, but for this purpose the honeycomb may have middle walls, which the beekeeper adds to the bee colony as a "construction template".

The word itself is reminiscent of the color of honey, because the German word comes from an Indo-Germanic term that describes this color as golden.

The ancient Egyptians already knew about the benefits of honey and already bred bees to offer honey to their gods or to give it to their pharaohs as a burial gift. And also the people of the stone age used honey as food, as it cave paintings show.

Around 400 BC, Hippocrates recognized that ointments with honey reduced fever, and that honey water could improve the performance of athletes in athletic competitions such as the Olympic Games.

Honey also served as the only sweetener for a very long time, because it was only late that sugar was industrially extracted from sugar beets. 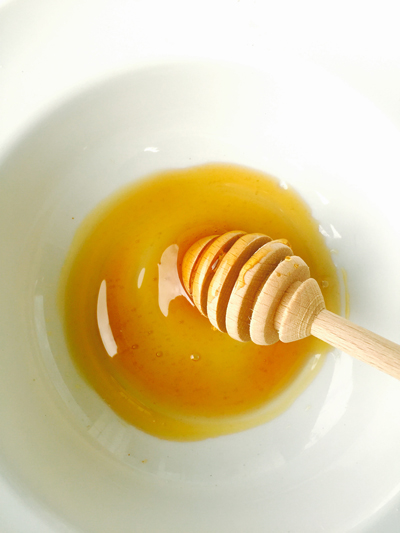 Why is honey so healthy?

Honey contains vitamins such as B1, B2 and B6, as well as vitamin C and minerals such as calcium, iron, magnesium, sodium, phosphorus, potassium and zinc, but it is some bioactive substances and antioxidants that make honey so healthy. It is said to strengthen the immune system and help heal wounds.

In particular, the so-called inhibins, a group of active substances such as enzymes, resins and flavonoids with anti-inflammatory effects, are said to produce the healing effect. At temperatures above 40 degrees, however, this effect is lost.

By the way, experts recognize freshness and naturalness by the HMF value. This denotes the decomposition product hydroxymethylfurfural (HMF), which can be detected in honey.

The less this is now present in the honey, the higher the quality and content of healthy active ingredients.

As a remedy, honey is versatile. Be it in wound healing, as it acts as a natural antiseptic, or in the fight against acne, as it promotes the healing process.

Honey can also help with skin diseases such as psoriasis, herpes blisters or minor burns.

However, care should be taken to take rather special medicinal honey from the pharmacy, because in the natural honey may contain germs. Honey from the pharmacy must usually meet special purity and safety requirements and contain effective ingredients in appropriate quantities.

Honey is also moisturizing and can be used as a soothing lip balm or as a delicately scented additive in shampoos or creams.

How much honey is still healthy?

Honey is a high-calorie energy supplier due to its high sugar content - this should not be forgotten. And for this reason alone, do not consume it in large quantities. Enjoyed now and then, it is definitely an enrichment of the daily meals.

Honey is not suitable for everyone. Babies and small children as well as people with fructose intolerance should not consume natural honey, since it may not be heated over 40 degrees and thus is not absolutely germ-free.

Honey may contain spores of a bacterium called Clostridium botulinum, which can otherwise colonize and multiply in the immature intestinal flora of infants and young children. There it could then produce life-threatening toxins.

Manuka honey as a remedy

It was not until relatively late that the benefits of Manuka honey, which originates from New Zealand, were discovered outside the country. Even the indigenous people, the Maori, used this honey extracted from the flowers of the New Zealand myrtle as a remedy.

The effect and composition of this type of honey is unique in the world due to its particularly high methyglyoxal content (MGO). This refers to an enzyme and sugar breakdown product with antibacterial properties.

The MGO is not yet present in the nectar itself and is said to develop only after ingestion by the bees and transport to the hive.

To indicate the potency of this Manuka Honey, UMF® numbers from 0 to 15+ are used, with numbers 10 to 14 indicating that this Manuka Honey supports natural healing and bacterial balance. Or in other words, the higher the number, the stronger the antibiotic effect is said to be.

Who would like to try the pleasantly sweet and at the same time tart taste of Manuka honey: In our online store we now offer this excellent honey from Manuka South®.